5 Reasons to Visit the Galápagos Islands

About a thousand kilometres from the shores of South America lie a sprinkling of islands against the deep blue of the Pacific. To the untrained eye, this tiny collection of landmasses look no different than any other island, but on closer inspection, you will see an entire microcosm that’s unlike any other, one whose distinctiveness left Charles Darwin flabbergasted. Discover the mesmerising UNESCO World Heritage Site of Galápagos Islands with our top 5 reasons to visit the Galápagos Islands.

The Theory of Evolution

In the year 1831, the HMS Beagle set off from England taking a group of scholars towards the coast of South America. Amongst them was a young naturalist of no particular importance… until then.

Charles Robert Darwin arrived at Galápagos Islands and was blown away by the unique species of animals that had evolved to make the islands their home. Observing how the features of a seemingly similar species of bird, now known as Darwin’s finches, varied from one island to the next, Darwin began theorising the phenomenon of natural selection. Thus the seed for his legendary “The Origin of Species” was sown.

Set foot on the land that gave birth to the theory of evolution and witness survival of the fittest in the flesh amongst the various Galápagos Islands’ things to see. 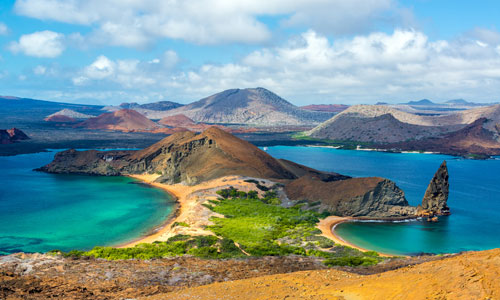 The Galápagos Islands are a melting pot of flora and fauna is, without a doubt, the top item on the ‘what to see in the Galápagos’ list. From the giant tortoise to the marine iguanas, these islands have been isolated for millennia allowing the plants and animals to evolve into distinct species that exist nowhere else on earth.

Darwin’s finches, lava lizards, waved albatross, Galápagos penguins and the Galápagos hawks are some of the endemic species of the islands. The sheer of range colours you will witness throughout the islands is astounding. Blue-footed and red-footed boobies engaged in a comical mating dance, multi-coloured sally lightfoot crabs scuttling across grey rocks, flaming red headed lava lizards curiously scanning the surroundings, bright pink Galápagos flamingos gracefully picking their way in the water, and Frigatebirds inflating their deep red gular pouches to impress a mate, are some of colourful antics you’ll get the chance observe.

The Galápagos Islands are an explosion of colour everywhere you look. 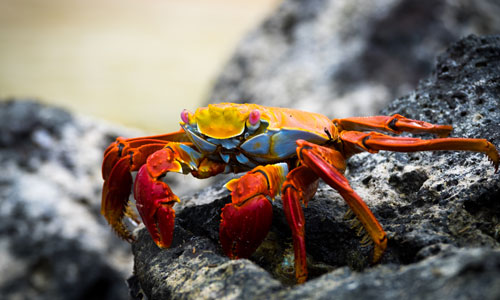 If you’re still questioning why visit the Galápagos Islands, you should know that this might be your best chance to click the most spectacular close-up photographs with the unique wildlife in their natural habitat. The most endearing and special aspect to any Galápagos journey is how unperturbed the animals are by human presence. They have no fear and are accustomed to visitors, leading to up close encounters with the many unique species.

When swimming at a beach you may find yourself face to face with a sea lion, or while walking along a trail you may have to carefully pick your way through a group of marine iguanas sunning themselves on the rocks. These types of meetings with the wildlife are everyday occurrences in the Galápagos Islands and something you can look forward to on your visit. 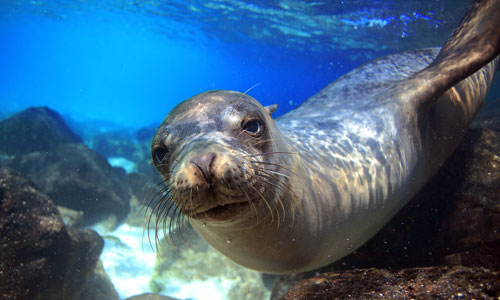 The Galápagos Islands are one of the world’s most unique lands. Being an ancient volcanic archipelago in a remote part of the Pacific Ocean, the landscape here is truly one of a kind.

You will have the chance to visit the various islands, bask in the warm sun on pristine white beaches, swim within the turquoise waters and explore the islands’ bounty of wonders. The islands are home to several still active volcanoes and to hike along their caldera is a thrilling experience. 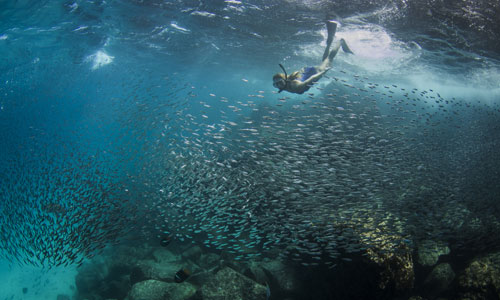 Order your free 2020/2021 South America brochure today to start planning your next adventure. From the mysterious Machu Picchu, one of the Seven Wonders of the World to the thundering roar of the Iguazú Falls and the iconic fauna and wildlife of the Galápagos Islands’, a journey to South America will provide you with memories to last a lifetime.
Order Free Brochure