Enigmatic Moscow has long been front and centre on the world stage. Here is a city steeped in history, and defined by long-held cultural positions

For centuries, Moscow has been shaped by war, revolution and political upheaval.

From the great tsars to the Romanovs, and onward to the defining influence of the Soviet Union; the Russian capital has been at the centre of many defining moments in global history – contributing to its rich heritage and immersive culture.
As part of your unforgettable journey on the Volga River, you’ll visit Moscow and encounter its renowned architectural treasures and fascinating culture. To inspire your visit to this incredible city, here we offer an introduction to Moscow’s architectural and cultural highlights, history and gastronomy.

Moscow is defined by its architecture, with structures such as the Kremlin and St Basil’s Cathedral embodying the enduring power and might of Russia. Explore the key architectural highlights to look out for on your visit to the city below.

Embodying Russia’s might, power and political complexity; the Kremlin is an ancient fortress, whose deep medieval walls and imposing towers tell of Moscow’s turbulent, storied past. The fortified citadel lies at the ancient heart of Moscow, for it was here, thousands of years ago, that the city was first settled. Expanded and built upon through the centuries, the Kremlin is now a sprawling and domineering structure, and has served as the official residence of Russia’s imperial tsars and federal presidents since the 2nd century. With five palaces, four cathedrals and numerous other heritage buildings within the walls of the Kremlin, a whole day could be spent exploring its treasures. St Basil’s Cathedral is among Russia’s most recognisable landmarks, its brightly-coloured onion domes standing in contrast to the domineering architecture of Red Square. Built at the behest of Ivan the Terrible, the cathedral cemented Moscow as the spiritual heart of the Russian state – being the country’s biggest and most influential Orthodox vestige. It’s believed St Basil’s was influenced by the ancient architecture of Jerusalem, particularly through its ornate tilework and lavish multi-dome structure. Part of the Red Square UNESCO World Heritage Site, this is an unmissable heritage wonder on your visit to the Russian capital. The Ivan the Great Bell Tower lies at the heart of the Kremlin, both figuratively and compositionally. Built in the 16th century by Italian architect Bon Fryazin, the tower serves as the principal bell tower for the Kremlin’s churches and cathedrals, including Uspenskiy, Blagoveshchensky and the Cathedral of the Archangel. Rising to a height of 81 metres, it’s possible to climb the 329 staircases to reach the viewing platform at the top of the tower, where far-reaching views across Red Square are revealed. Remarkably, the tower features some 24 bells, all of which were installed in the 17th century. From 1918 to 1992, during the Soviet era, the bells were silent, but now they chime on many of Russia’s religious holidays.

Few entertainment venues hold the prestige and history of Moscow’s Bolshoi Theatre. Opened in 1856, on Alexander II’s coronation day, the Bolshoi was built as the official concert hall for the renowned Bolshoi Ballet, which was launched a century earlier by Catherine II. Designed in a spectacular neoclassical style, the theatre is one of the most impressive structures of the Romanov period, and is renowned for its ground-breaking acoustics, which were refined by architect Alberto Cavos. In 2011, a huge renovation project was completed at the Bolshoi, and now the theatre plays host to a packed programme of events, including classic ballet performances like Swan Lake and the Nutcracker.

From the tsars to the Soviets, much has contributed to the culture and heritage of Moscow. Here, uncover some of the city’s cultural mainstays – from the State Armoury to the Memorial Museum of Cosmonautics.

Housed within the mighty Kremlin, the State Armoury is the historic national treasury of the Russian state. Built in the 12th century, this remarkable heritage site houses some of the finest jewels, treasures and artefacts in Russian history – from the Golden Gospel of Ivan the Terrible to a dazzling collection of priceless Faberge eggs. The museum contains artefacts of immense cultural and historical value, including 12th-century armour, detailed coronation robes and select pieces from the Russian Diamond Fund – a unique cultural encounter, highlighting the wealth and power of the Kremlin. Owing to Russia’s contribution to space travel, and its part in the notorious Cold War ‘Space Race’, Moscow is home to a heritage centre dedicated to the country’s interstellar exploits. The Memorial Museum of Cosmonautics houses some 85,000 artefacts related to Russia’s space exploration heritage, including early Soviet moon rovers, spacesuits and the capsule used by Yuri Gagarin – the first man to travel into space. The site is also renowned for its dramatic exterior design, which features a towering statue of a Soviet rocket blasting skywards. 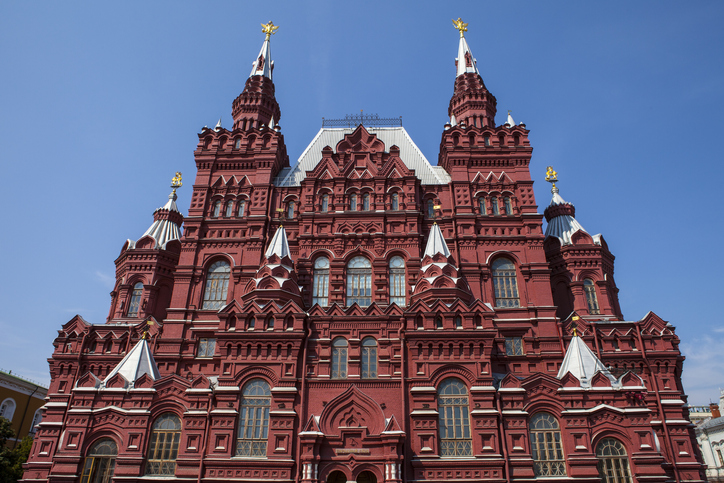 Moscow’s State Historical Museum is the principal natural and people’s history museum of Russia, housing millions of artefacts which relate to the history and development of the Russian state. Located close to Red Square and built in a distinctive Baroque style, the museum showcases a catalogue of objects from ancient times to the present-day – from archaeological finds which date back to the Stone Age, to poignant relics from Russia’s Soviet past. For anyone wishing to learn more about the history of Russia and its enigmatic culture, this is the place.

Moscow is one of several European cities which uses its subterranean railway stations for more than just travel. The city’s Metro network is revered for its highly ornate and decorative platforms, which showcase different eras in the city’s architectural, artistic and political history. Developed in the early 20th century, the city’s Metro stations were designed by the Soviet Union, which explains the propagandist iconography and busts of key Soviet leaders. Be sure to call at Kiyevskaya, Avtovo, Belorusskaya and Arbatskaya for an alternative side to Moscow’s culture.

Another classic Russian dish, borscht is a soup which originated in Ukraine but has been readily adopted by its neighbour. Beetroot and tomatoes are used to give the soup its distinct red colour, while the broth itself is traditionally flavoured with dill, parsley, garlic and sour cream. Meat, beans, carrots, onions and potato are the customary borscht soup fillings, though the vegetarian version is also popular. Accompanied by a hunk of bread, there’s no more warming taste of Russia. Pirog is a classic Russian dish, often served during special occasions but readily available in the eateries of Moscow. A large pie with a sealed, puffy crust, the dish can be enjoyed either in restaurants and cafés, or as a meal on the go. Perhaps the most common variety of pirog contains a filling of spinach, mushrooms and meat, though herring and other fish are also used. Traditionally, pirog was seen as peasant food, but is today considered one of the cornerstones of day-to-day Russian cuisine. Vodka is beloved throughout Russia, and the spirit enjoys a refined reputation, with many locals sipping it like wine. For centuries, vodka has played a significant role in Russian life, and is now entrenched in local culture and folklore. In Moscow, the local and most popular variety is Moskovskaya Osobaya, which is normally enjoyed alongside rye bread and pickles as an aperitif.

View the latest Russia river cruising offers and save.

Specifically built to sail the magnificent Russian waterways, MS Nizhny Novgorod is a comfortable and traditional river ship, and the perfect base from which to explore the remarkable charms of Russia.

From Moscow and St Petersburg to the idyllic water-side village of Mandrogi, Russia has much to offer the curious traveller. 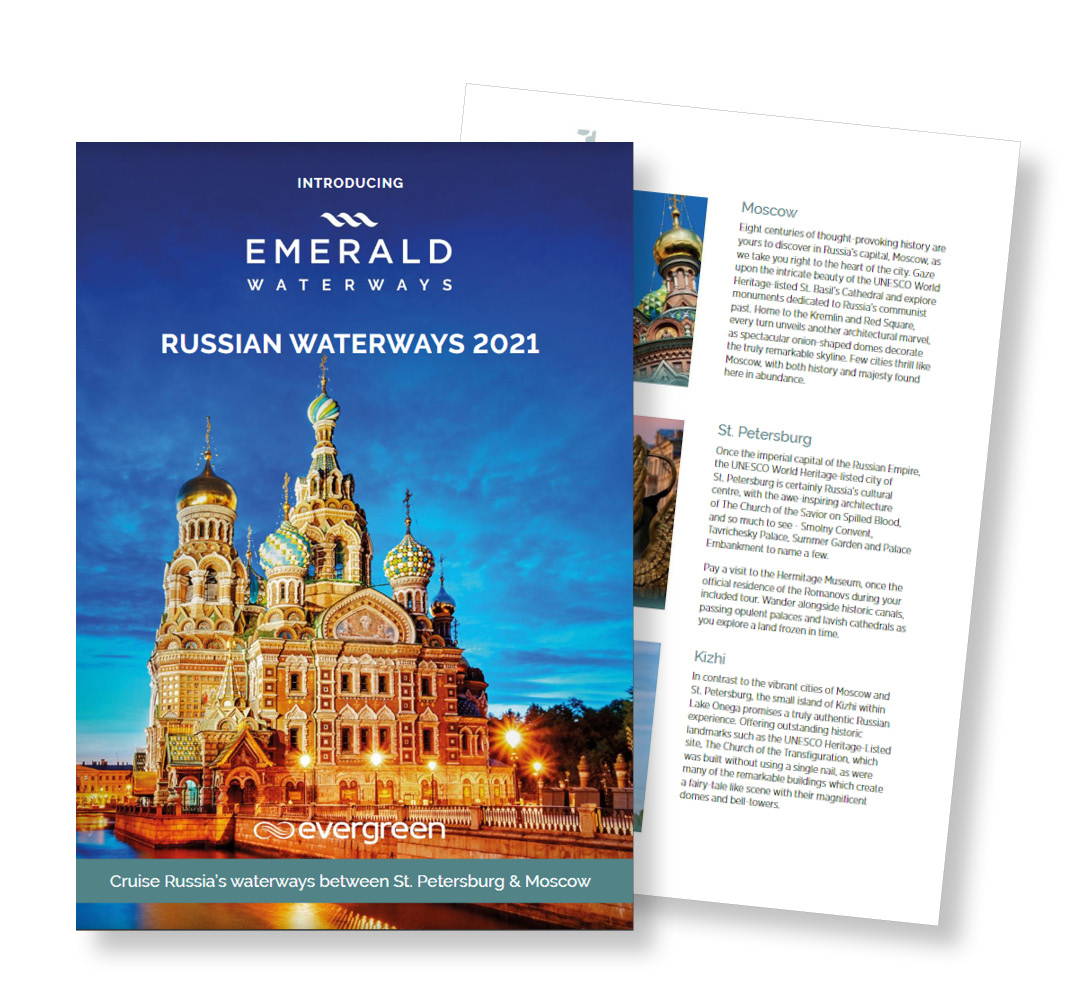